Green Party Leader Clare Bailey has introduced a Bill in the Northern Ireland Assembly to criminalise pro-life people outside abortion centres. The First Stage of her so-called 'Abortion Services (Safe Access Zones)' was introduced on 13 September and the Second Stage is still to be scheduled.

The explanatory notes state the purpose of the Bill is to '...make it a CRIME to DO ANYTHING...’ outside an abortion centre '...which might influence a person in their decision to attend...' an abortion centre.

The Bill states the purpose of the zones is to ensure pro-life people '...are criminalised’ for any actions within a zone which may have the effect of 'influencing' persons accessing the abortion centre.

Therefore, simply holding a sign; distributing information leaflets; talking to a woman to offer her help, or even praying outside an abortion centre will be '...punishable on conviction by fines' up to £2500

The Bill also gives police the power to '...use reasonable force' to physically '...remove' a pro-life person from the zones.

Clare Bailey’s abortion zones are discriminatory as they would only target pro-life groups. Freedom of assembly and freedom of expression are fundamental human rights – both protected under Articles 10 and 11 of the Human Rights Act.

Clare Bailey is a hypocrite. She demands ‘safe access' to abortion centres, but completely ignores the reality that babies are being killed inside these centres. The ultimate safe zone for unborn babies should be in their mothers' wombs.

Also, Clare Bailey and other pro-abortionists who campaigned to legalise abortion in Northern Ireland, continually said women should not be criminalised. Now her Bill actually states in black ad white that pro-life women outside abortion centres must be 'criminalised.'

Clare Bailey wants to cancel the Right to Assembly and the Right to Free Speech. But Precious Life reiterate that the right to freedom of assembly and right to freedom of expression are fundamental human rights. If this Bill is passed, we will challenge it through our local courts, the High Court, the Supreme Court, and if need be, right up to the European Court of Human Rights.

Our vigils in Northern Ireland will continue offering help and life-affirming alternatives to women outside the abortion centres. We will never stop actively protecting unborn babies — when and wherever their lives are in danger of abortion.

TAKE ACTION
Contact your MLA and ask them to oppose the Abortion Services (Safe Access Zones) Bill. It is draconian and oppressive, and totally discriminatory as it only targets and criminalises pro-life people.

Pro-life vigils are peaceful, and the police already have adequate powers to deal with any alleged actions that are against the law.

Remind your MLAs that every political party in Northern Ireland has taken part in some form of public 'protest.'

Please share this ACTION ALERT with your family and friends. 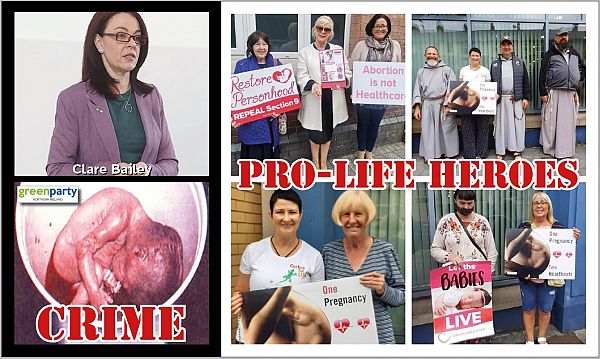