Save a baby AFTER birth - PRAISE ...Save a baby BEFORE birth - CONDEMNATION

Gullu Chaudhary said he was alerted by the cries of the 21-day-old girl and found her wrapped in a red scarf in the box. Mr Chaudhary told local reporters that when people on the river bank heard the baby girl's cries, no one stepped forward to help. "But I rushed to rescue her. When I opened the wooden box, I found her."

Videos showed the boatman picking up the box from the water and cradling the newborn in his arms.

The BBC article goes on to report that girls in India are seen as a “financial burden” so most are aborted.

The state government said Mr Chaudhary would be rewarded with government benefits, including a house, for showing a "matchless example of humanity". 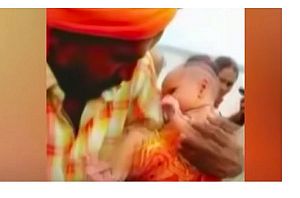 But what if, 22 days earlier, Mr Chaudhary had been standing outside an abortion centre. What if that same baby girl was destined to be aborted that day. What if Mr Chaudhary had spoken to the baby’s mother and offered whatever practical and financial support she needed to keep her baby.

Would the story still have been reported by the BBC, praising him for his selfless humanity?

No! Mr Chaudhary would have been condemned and vilified, and accused of “harassing” women.

Precious Life praise and commend Gullu Chaudhary. When other people heard that little baby’s cry, they ignored it. They were willing to let that baby girl die. But Mr Chaudary stepped forward and saved the life of that little baby girl.

And Precious Life praise and commend all people who stand outside abortion centres as a matchless example of humanity, to rescue the baby girls and boys destined to be killed there.

Here in Northern Ireland, unborn girls and boys are silently crying out. But their cries are ignored by political parties like Sinn Fein, SDLP, Alliance and Green Party. Not only do they ignore the babies’ cries, these politicians actually demand more babies are killed.

And when Precious Life’s dedicated volunteers ‘step forward’ to rescue these babies, we are condemned and vilified, and accused of “harassing” women. We are even physically attacked and assaulted.

But Precious Life will continue stepping forward and offering women life-affirming alternatives to abortion. We will give the practical and financial support they need to keep their babies.

We encourage you to join us outside the baby-killing centres in Northern Ireland. Please don’t be like the people on the river bank in India who heard the baby girl's cries, but no one stepped forward to help.