Police Chief acknowledges pro-life people have rights to freedom of thought, conscience and religion, freedom of expression and assembly

Clare Bailey continues to spout lies and misinformation about “harassment and intimidation” outside abortion centres, while providing absolutely no evidence.

The latest Stormont Health meeting on Tuesday heard from a senior police officer who told the committee that human rights must be balanced in the enforcement of proposed ‘access zones’ around abortion centres in Northern Ireland.

PSNI Chief Superintendent Melanie Jones gave NO EVIDENCE of any harassment or intimidation outside abortion centres, nor any incidents that police could not have dealt with under the legislation that currently exists.

She told the committee the vast majority of incidents include the display of abortion images, and handing out leaflets. The Chief Superintendent also said that most of the pro-life gatherings are “fairly compliant”.

The Chairman of the Stormont Health Committee, Colm Gildernew from Sinn Fein, supports killing unborn babies, and criminalising people who speak out to protect unborn babies. He boasted that there are similar draconian laws in Canada, parts of Australia and the United States, while Ireland is considering proposals.

Also on the Health Committee is pro-abortion MLA Caral Ni Chuilin from Sinn Fein. She had the audacity the exploit the grief experienced by women who suffered miscarriage in her support for abortion and criminalising pro-life people.

When those who support abortion don’t even acknowledge a baby in the womb as a human being, they trivialise and make a mockery of a woman’s grief after miscarriage. Women suffering and grieving after miscarriage have to endure cruel and insensitive words from pro-abortionists such as "...it’s only a blob of cells …it’s a parasite …it’s not a human being …it has no right to life". These women do not suffer and grieve over "blobs of cells" and "parasites" - they suffer and grieve over the loss of their little baby. And many women in pro-life groups have also suffered miscarriages. But it’s having suffered the pain and grief of losing a child that motivates them to want to help protect babies in the womb, and help protect women from the physical and emotional trauma of abortion. But Clare Bailey, Sinn Fein, and other pro-abortion MLAs in Stormont want to criminalise these women.

Chief Supt Jones told the Health Committee she would advise "careful consideration around the competing human rights at play". She acknowledged pro-life people have rights to freedom of thought, conscience and religion as well as freedom of expression and assembly.

When asked by DUP MLA Pam Cameron asked about how many police hours the legislation would require, Chief Supt Jones said it would increase demands on policing. “Protests of this nature can be frequent and spontaneous and be elongated, and effective policing would probably require a continuous police presence for the duration of any such activity”, she said.

Chief Superintendent Melanie Jones concluded that she felt it would be naive to think enforcement of the abortion access zones legislation, if passed, would not be subject to legal challenge. 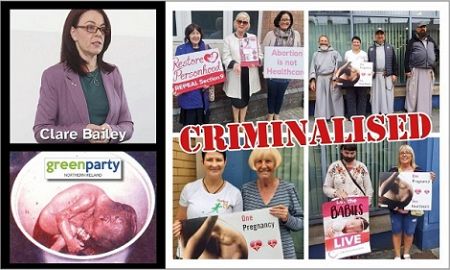