US pro-life office firebombed by Antifa

10 May 2022 - Police in the USA have confirmed Antifa firebombed a Wisconsin pro-life charity's office. During the attack on the office of Wisconsin Family Action, a window was broken and the building was covered with graffiti. Vandals spray painted the walls with the chilling message: 'If abortions aren't safe you aren't either.'

The Antifa symbol - a capital 'A' inside a circle - was also scrawled on the wall, as well as the numbers 1312 - a code for the letters ACAB, which stand for 'All Cops Are B*stards.'

The attack comes just days after a leaked U.S. Supreme Court document revealed a majority of their judges had agreed to overturn “Roe v. Wade” – the infamous 1973 Supreme Court ruling that legalised abortion across the United States. More than 63 million babies are estimated to have been killed in the U.S. since then.

The leaking of the Court document lead to protests from those who support the killing of unborn babies.

Two petrol bombs were thrown at the Wisconsin Family Action office. A room at the foundation was badly-damaged by fire. It was discovered early Sunday morning when a passerby called police and reported seeing flames coming from the headquarters of the pro-life group.

No one was hurt in the attack, but Madison Police Chief Shon Barnes said had someone been in the office 'it could have gone differently.' Barnes said the investigation could be lengthy. 'I do anticipate we will be able to solve this but we want to take our time to be sure we do it correctly,' he said.

Investigators from the FBI and the Bureau of Alcohol, Tobacco, Firearms and Explosives are assisting with the investigation. Police Chief Barnes encouraged anyone who may have seen anything to contact police. Area businesses were also being contacted to see if they have any evidence or captured anything on surveillance cameras, he said. 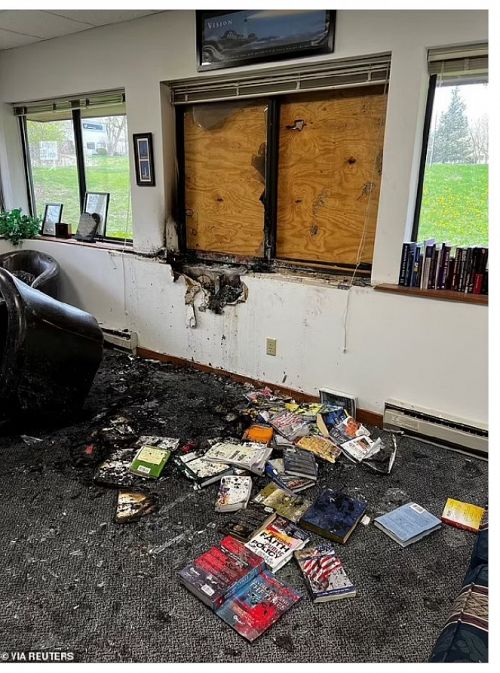 Julaine Appling, president of Wisconsin Family Action, said she believed the vandalism was a direct response to the leak of the Supreme Court document. She said 'this attack fails to frighten us, and instead steels the resolve of law-abiding, common-sense, every-day folks to stand up and push back.'

Wisconsin Family Action has been a prominent force in the state for years, advocating for laws to limit access to abortions, fighting to overturn the “Roe v. Wade”

Pro-abortionists protested in cities around the U.S. on Saturday, vowing to fight to ensure the killing of babies before birth remains legal. Pro-life advocates also took to the streets to defend the right to life of babies in the womb. Hundreds gathered in several major cities across the nation, including Chicago, Atlanta and Houston, to fight for the right to life of unborn babies.

The pro-abortion protests came after Joe Biden’s White House said it encourages protests, and would not tell abortion activists to avoid the judges’ homes.

White House Press Secretary Jen Psaki said on Thursday that President Joe Biden's message to those angered by the Court document is to 'protest'.

She said the President shared their “horror” that laws might change to protect unborn babies.

The leaked Supreme Court document says the Roe v Wade Court ruling "had damaging consequences", was "ergregiously wrong from the start" and "must be overruled".

Pro-life legislation in the US has been increasing in recent months as Republican-led states move to strengthen laws protecting unborn babies - with some seeking to ban all abortions after six weeks,

These include Arizona, where the Republican Governor in March signed a bill banning abortions after 15 weeks of pregnancy; and Idaho where the governor signed a six-week abortion ban that allows family members of the unborn child to sue abortionists, similar to a Texas law enacted last year.