A Co Derry councillor has spoken out after he was the victim of an 'unprovoked' and 'vicious' assault. Those who attacked him support killing babies in the womb.

Aontú Cllr Emmet Doyle, a member of Derry City & Strabane District Council was attacked in the Waterloo Street area of Derry city and was targeted for his views on protecting unborn babies

Aontú’s party policy is “100% pro-life”. In the last Assembly election the Party stated: “Aontú are the only Nationalist pro-life party contesting this election. The right to life is a core value of Aontú and when elected, Aontú MLAs will seek to reverse the shocking abortion laws and provide support for mothers and their children.”

The Derry City & Strabane District Councillor made a statement to police following an assault in the early hours of Friday morning. 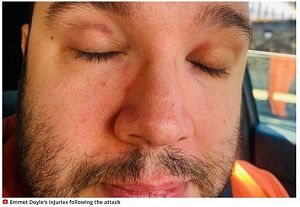 Mr Doyle said: “Whilst in the city centre in the early hours of Friday morning I suffered a vicious assault in Waterloo Street.

“After entering a food establishment alone, a group of people entered, some of whom I recognised to be members of a group deeply opposed to my stance on the right to life.

"They engaged me verbally and I left with my order.

“On leaving the premises I was accosted and received a cut to my head, bruises and black eyes. The attack was unprovoked.

“As an elected representative, I passionately defend what I believe in and act on behalf of constituents regardless of their views. I would never think of physically attacking an opponent, we are all entitled to our views and the respect to communicate them.”

He added: “I rang the police after the event to report the attack, but they didn’t attend the scene and rang me some time later.

“I was contacted and asked to come to the Strand Road Police Station this afternoon which I did, to be told no one was available to take my statement. I will attempt to do so again in the coming days.

“I’m deeply grateful for the messages and support I have received from my party leader, Peadar Tóibín TD, family, party colleagues, constituents and colleagues from across Council.

“Our city centre should be safe for anyone. Violence is entirely unacceptable no matter the victim and I intend to ensure the perpetrators are identified and prosecuted.

“Nothing will stop me serving my constituents, I won’t be silenced.”

Police in Derry confirmed a report of an assault at Waterloo Street. A PSNI spokesperson said: “It was reported that a man was punched several times to his face by an unknown male at around 1:20am on Friday morning.

Anyone with any information about this incident or who may be able to help with our investigation, is asked to call police at Strand Road on the non-emergency number 101, quoting reference number 100 09/09/22

Politicians from pro-abortion parties like Sinn Fein, SDLP, Alliance Party and Green Party continually try to demonise and spread malicious lies about anyone with pro-life views. These politicians must now bear some of the responsibility for this vicious attack. Their lies and verbal attacks only encourage and cajole those thugs who actually go out to physically attack pro-life people.