PRECIOUS Life led another blazing campaign trail across the province to highlight the injustice of the abortion law that Westminster forced on Northern Ireland.

Our ’Repeal Section 9’ Roadshow, kicked off in Enniskillen on Saturday 15 August. Next stop was Warrenpoint on Monday 17 August. Then on Wednesday 19 August we travelled to Newcastle. The Roadshow then headed to the North Coast on Friday 21 August when we visited Portrush. We completed our tour of Northern Ireland on Saturday 22 August with our final Roadshow in Lisburn.

Thousands of people across the province signed our ’Repeal Section 9’ Petition - making a robust appeal to our politicians to overturn Section 9 of the Northern Ireland (Executive Formation Act) – the most extreme abortion law in Europe.

By signing our petition, the people stated very clearly that abortion is not in our name, and that the right to life of every unborn baby must be safeguarded and protected within the province.

Director of Precious Life, Bernadette Smyth said: “The Westminster Parliament broke all principles of democracy when it enforced the most extreme abortion law in Europe onto Northern Ireland against the will of the people here.

"Last September, we organised March For Their Lives, were over 20,000 people united in Belfast City Centre to show our vehement opposition to any change to our pro-life laws. We may have been ignored by government but we still must speak out. At this moment, this abortion law could prove hard to reverse owing to the current makeup of the NI Assembly, but that doesn’t mean we should give up. We must continue to educate the general public on the horror of abortion, and protest against this barbaric legislation.

“With the easing of the lockdown restrictions, we are stepping up our Outreach work on the streets and we will continue to lobby our politicians and be a voice for the unborn children of Northern Ireland.

Bernadette concluded, "As an organisation, we don’t just talk about abortion -  Precious Life walk the talk!. We get out there onto the streets as our latest roadshow has showed. Abortion is not in our name. We will not rest until Section 9 of the Northern Ireland Executive Formation Act is repealed." 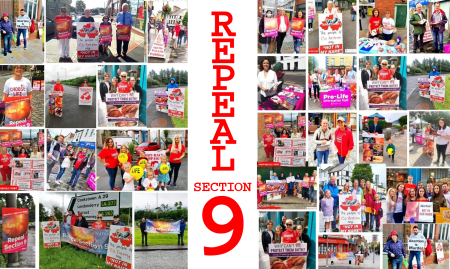