Precious Life says the government’s hypocrisy has been exposed by latest figures from the Department of Health revealing 664 babies were killed by abortion in the past 6 months in Northern Ireland.

The Westminster Parliament forced abortion on Northern Ireland through Section 9 of the ‘NI Executive Formation Act’, which came into effect on 31st March this year.

For the past 6 months we’ve been listening to the government preaching to us about protecting and saving lives. But they are hypocrites! On 31st March they implemented their abortion law that has now lead to the killing of 664 innocent unborn babies. The government has allowed more lives to be lost to abortion than have been lost to the coronavirus in Northern Ireland.

It is all the more outrageous that at a critical time when necessary and life-saving care such as cancer treatments and screenings for breast cancer were being postponed to preserve hospital equipment, beds and staff - abortion was a priority in Northern Ireland.

The Northern Health and Social Care Trust has since announced that it has stopped accepting referrals for abortions due to a “lack of resources”. The Northern Trust had been funding abortions itself for more than six months, and in a statement it said that it “does not currently have the resources to continue”.

While we welcome anything that might reduce the number of babies being killed, the fact remains that abortions are still being performed by Northern Ireland’s other Trusts. Our Health Trusts – who are responsible for saving lives - should not be using taxpayer’s money to kill our unborn babies.

Our Repeal Section 9 Campaign will continue until the right to life and full legal protection is restored to every unborn child in Northern Ireland. 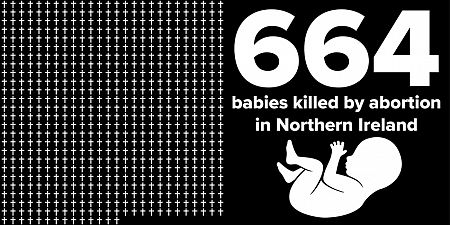