Both Pfizer and Moderna have announced major milestones in the race to get a COVID-19 vaccine candidate to market. Almost all media outlets and pro-life groups are claiming both vaccines are ethical, even though aborted fetal cells were used to test them. This is wrong, and here’s why it matters.

Another Operation Warp Speed breakthrough hit the news yesterday. This time, it was Moderna’s press release, claiming preliminary analysis of its COVID-19 vaccine candidate showed “94.5% effectiveness” in preventing symptomatic cases of COVID-19. Last week, it was Pfizer/BioNTech’s “90% effectiveness” claim. The media and the stock market have been in a frenzy. Pro-life news outlets like LifeNews.com and many national pro-life organizations and leaders are tripping over themselves to spread the good news that both vaccines are “ethical.

Here’s what we know for sure.

And both candidates used aborted fetal cells in the testing phase. 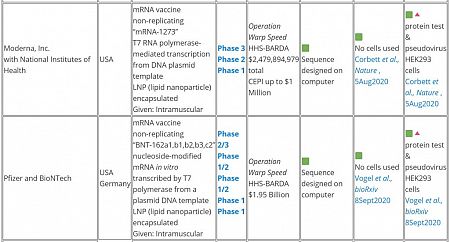 The Charlotte Lozier Institute (CLI) has published a comprehensive chart on the COVID-19 vaccine candidates. As shown in the screenshot above, the red triangle placed in the last column indicates the lab test used to test the vaccine included “abortion-derived cell lines.” Specifically, both the Pfizer and Moderna vaccine candidates used the HEK293 cell line during testing; immortalized cells from the kidney of an aborted child killed in the Netherlands in 1973.

Even though CLI’s data clearly show that both vaccines were tested using aborted fetal cells, CLI is one of the organizations claiming these vaccines are ethical, because they were not produced using an aborted fetal cell line. Jeffrey Barrow of the Christian Medical & Dental Association and Jonathan Imbody of Freedom2Care and the Christian Medical Association are also claiming the vaccines are ethical, writing in a recent article for Public Discourse that the Pfizer vaccine can be received “in good conscience.” So is Rev. Tadeusz Pacholczyk of the National Catholic Bioethics Center, who stated in a recent article that the connection of medical therapies to abortion is “unfortunate” but that it is “ethically permissible” to receive a therapy that is tested using aborted fetal cells.

Let’s come back to this inconsistency in a moment, and ask an important question we’re hearing often.

What does it mean to test a vaccine using aborted fetal cells?

Animal testing is a standard protocol of vaccine development before human trials begin, so it is this stage at which we hear about aborted fetal cells being used for testing.

Here, specialized mice are “humanized,” meaning mice embryos are transplanted with cells from an aborted child that have been programmed to develop into humanized lungs—the part of the body COVID-19 affects. When the mice are born, they have humanized lungs, created from the aborted fetal cell line. Researchers inject the humanized mice with the vaccine candidate and then infect them with a coronavirus that’s very similar to the COVID-19 disease to test the mice’s immune response to the vaccine product.

You may recall that humanized mice made the news a few years ago, when the Center for Medical Progress’s undercover Planned Parenthood videos, along with evidence directly from researchers, showed that aborted baby parts were being trafficked to create humanized mice for medical research. Those babies were part of the new aborted fetal cells lines that are currently being procured for use in medical experiments. Not cell lines from the 1970s that many say are too remote to still have any ethical issues attached to them; new cell lines for next generation therapies.

This begs the next question…

Can vaccines be tested without using aborted fetal cell lines?

The answer is yes.

According to Dr. Alan Moy of the John Paul II Medical Research Institute, there are currently several other human cell lines that are ethically non-controversial and can be effectively used for testing:

So why aren’t they being tested without the use of aborted fetal cells? Because, with the exception of the Personhood Alliance and a few others, no one is calling for the testing to also be ethical. And thus, no one is exerting any pressure on these pharmaceutical companies or our own government.

Instead, the Pfizer and Moderna vaccines are being celebrated.

Christians must demand an end to the trafficking and commodification of aborted human beings. Period. We must not participate or accept practices that perpetuate and encourage the relationship between abortion, biomedical science, and human trafficking, no matter when that connection was initiated or how long a practice has been medically accepted.

Now is the perfect time to completely and publicly reject both unethical production and testing of these vaccines and to demand that the ethical alternatives already in the pipeline be brought to market in the US instead. In the meantime, American taxpayers are already on the hook for billions of dollars in funding—funding that continues to sustain the evil of abortion.

We must now ask ourselves: At what other time have we had such a clear, immediate opportunity to plead a consistent case for vaccine ethics?

The production and testing of vaccines that use the remains of aborted human beings, regardless of when they were killed and at what point they were used in the process, is morally unacceptable and must be consistently opposed. If not now, as new vaccines are currently being created….then when?

It is time for people of good conscience to speak the truth about these vaccines and demand that the connection between abortion, biomedical science, and human trafficking be severed. We encourage other pro-life organizations and leaders to join us in doing so.

By Sarah Quale - President of Personhood Alliance Education, founder of Educe® online learning, and author of the Foundations online pro-life curriculum. She is an award-winning curriculum and instructional designer who has worked for over 20 years in corporate, academic, and ministerial environments.

Reprinted with permission from Personhood Alliance