COVID19 vaccine - how can anything associated with abortion be ethical?

On Tuesday 8th December 2020, the UK became the first country in the world to start injecting its population with a vaccine for COVID-19

Since the beginning of October, Precious Life has exposed the reality that the vaccine was tested using a cell line derived from a baby killed by abortion.

Director of Precious Life Bernadette Smyth said “Now that vaccinations have begun in Britain and Northern Ireland, some church leaders, and even some pro-life groups, are claiming that the Pfizer and Moderna vaccines are ‘ethical’ even though they know aborted fetal cells were used to test them. By doing so, they are giving credibly to the erroneous mentality that ‘the end justifies the means’. But the end does not justify the means. There are acts that are always wrong. One may not do evil so that good may result from it.”

Ms Smyth explained, “Both vaccines were developed using the HEK293 cell line – a cell line derived from the kidney of an unborn baby boy killed in the Netherlands in 1973.

The production and testing of any vaccine that uses cells of aborted babies - regardless of when they were killed, or at what point they were used in the process of developing the vaccine - is unethical and morally unacceptable.

To those who say abortion is unethical, yet say this vaccine is ethical, the question that must be asked is - at what stage did the vaccine become ethical?

Bernadette Smyth concluded, “The killing of an unborn baby is always totally wrong and unethical. Therefore anything – any preparation, procedure, or product – that is a further stage after killing that baby, is equally unethical and must be consistently opposed." 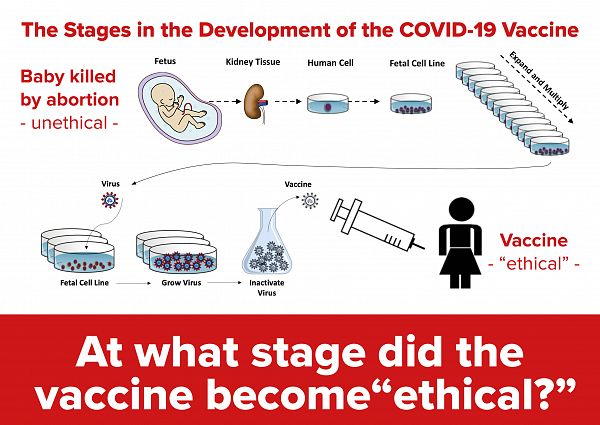