Robin Walker, the Minister for State for Northern Ireland, made the threat in the House of Commons as he was questioned about the current law in the Province (Walker is effectively the government’s second-in-charge representative to Northern Ireland after NI Secretary Brandon Lewis.)

Abortion was forced on Northern Ireland by the Westminster Parliament in October 2019. Section 9 of Westminster’s NI (Executive Formation etc) Act removed the sections of the Offences Against the Person Act that had previously protected unborn babies and their mothers from abortion in Northern Ireland. The amendment to remove this protection was tabled by the radical pro-abortion MP Stella Creasy. Their new abortion regulations came into force on 31 March 2020. Health Minister Robin Swann has since admitted that 664 babies were killed by abortion between March and October 2020.

On commissioning more abortions, Walker said he was “continuing to engage with the minister of health and his department..." but added that he is also “considering further legislative action at Westminster”.

Responding to pro-abortion Alliance MP Stephen Farry, he said: “We do want to see progress…” [on killing more babies] “…we would continue to prefer it to be delivered by the devolved institutions. But as I’ve said already, we stand ready to act if that progress is not made.”

Farry also wrote to the Northern Ireland Office  to ‘raise concerns’ that there hasn’t been enough abortions here.

The latest threat from Westminster follows in the wake of legal action instigated by the so-called ‘Human Rights’ Commission (NIHRC) to have more unborn babies killed by abortion in Northern Ireland. Precious Life exposed the hypocrisy of this pro-abortion quango masquerading as a Human Rights Commission yet denying all rights for the little humans they want killed by abortion.

Bernadette Smyth added “This latest abortion threat from Westminster exposes the hypocrisy of the Government who claim they want to ‘save lives’ in the covid pandemic, yet they want to destroy lives of even more unborn babies in Northern Ireland.

“664 babies have already been killed in Northern Ireland and that number will now be even higher since October. But that’s not enough babies killed for Stephen Farry, Stella Creasy and Robin Walker, They want the Government to override democracy and devolution again by taking legislative action at Westminster to force more abortions on Northern Ireland.”

Bernadette Smyth concluded, “Precious Life call on all people in Northern Ireland to contact their MP and MLAs to demand that Westminster stop interfering in devolved matters, and urge our Assembly to save lives by repealing Section 9 and restoring personhood to our unborn babies." 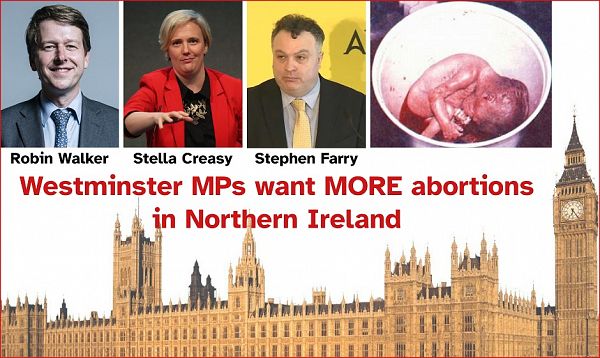