The Alliance Party in Northern Ireland want a law to protect wild animals from being killed by dogs. Alliance MLA John Blair plans to bring a Private Members’ Bill to outlaw the practice.

Blair says his bill is an “attempt to stop the practice, which most people see as barbaric and totally socially unacceptable …it is shocking we are almost in 2021 and still we are without such a ban in Northern Ireland …Animal welfare is a priority for Alliance…we want to see the elimination of all cruelty towards animals …seeing animals ripped to shreds by dogs is nothing but cruel …the barbaric past time of blood sports needs confined to the past and I am committed to help do so.”

Many anti-hunting groups set up public information stalls where they use graphic imagery of animals killed by hunting.

Precious Life also set up public information stalls where we use graphic imagery of babies killed by abortion.

However, in 2019 an Alliance Councillor said she was hopeful that Precious Life’s Information Stall would be removed from Belfast city centre because we use abortion images.

Alliance Councillor Michelle Kelly has said she was pleased after the Belfast City Council town solicitor confirmed he was looking into the issue of abortion imagery on stalls in the city centre. Councillor Kelly, along with other Alliance party colleagues had brought the matter to the attention of the Council. “I am hopeful it will lead to these sorts of images being removed from public display in the city centre” she said. She also described anyone who exposes the horror of abortion by using images as “deliberately cruel” and said she hoped they are “stopped.”

The Alliance Party are hypocrites!

Their politicians support the killing of babies by abortion. They describe abortion as a “service.” 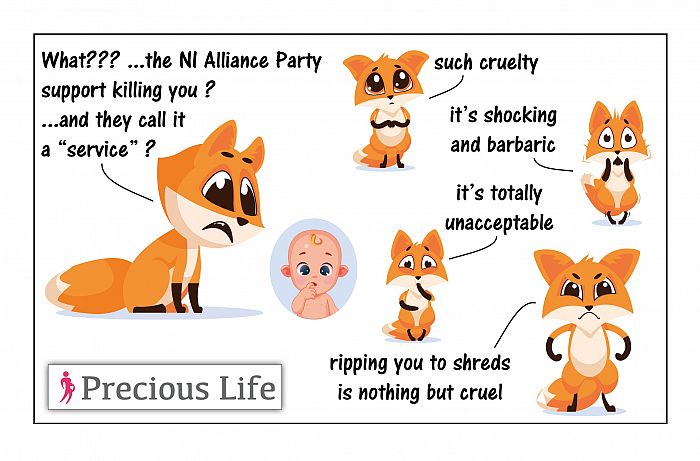