Precious Life has condemned a report from an abortion group calling for “exclusion zones” to be introduced outside abortion centres in Northern Ireland.

Director of Precious Life Bernadette Smyth said, “Since our formation in 1997, Precious Life has held daily Prayer Vigil and Outreach offering help and support to vulnerable women outside abortion centres.

“Today we commemorate the first anniversary of the implementation of Westminster’s abortion law on Northern Ireland and mourn the 1345 little babies that have been killed this past year.

“But today is also the day that these pro-abortionists choose to issue their report calling for more babies to be killed, and also to criminalise innocent people who make a public stand to protect and save lives of unborn babies.”

Last year, MPs at Westminster voted in favour of a proposal calling for “exclusion zones” outside the baby-killing centres in England. Following a public consultation, the UK government decided not to include powers to establish exclusion zones in Northern Ireland, but said it would keep the matter "under review". The DUP were among 47 MPs who opposed the move. The party's North Antrim MP Ian Paisley said protesting was a "fundamental part of the democratic process" that must be allowed to continue to take place. "The big issue of the right to protest and right to free assembly is an overriding principle," he said.

Pro-abortion extremist Clare Bailey - Green Party Assembly Member - is planning to bring forward a private member's bill to ban and criminalise those taking part in Pro-life Prayer Vigils but it is not clear when this could be introduced in the Assembly.

Bernadette Smyth concluded, “The right to freedom of assembly and right to freedom of expression are fundamental human rights. Precious Life’s Prayer Vigils will continue offering help and life-affirming alternatives to women outside the abortion centres. We will never stop actively protecting unborn babies - when and where-ever their lives are in danger of abortion.” 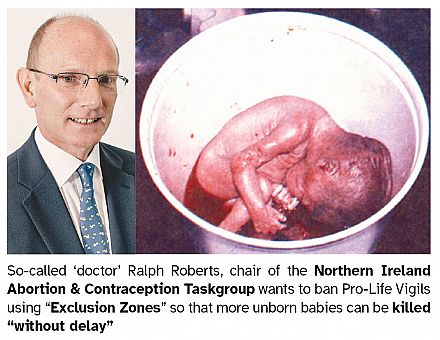