The BBC has reported that it could take up to 10 years to tackle Northern Ireland's current waiting lists, which are increasing daily (https://www.bbc.co.uk/news/uk-northern-ireland-56731572)

The report reveals that Northern Ireland has the worst waiting times of any UK region. More than 300,000 people are waiting for a first consultant appointment. Health Minister Robin Swann told the Stormont assembly that too many people are waiting "too long for treatment". The Department of Health said to address the "burning issue" of waiting lists, a number of consultations would be published including a cancer recovery plan. But Mr Swann said recruiting more staff to reduce wating times is “problematic” because of lack of funds and "we are in grave danger" of undermining the health service.

However, since Westminster’s abortion law was implemented in Northern Ireland last March, over 1345 abortions have been carried out here.

Using even the lowest estimate of £500 for each of the 1354 abortions means that more than half a million pounds has been spent in the past 12 months. It’s an outrage that, due to lack of funds, 300000 people are waiting years for genuine and necessary medical treatment while more than £672,500 has been spent on abortions.

With our health service strapped for cash, they want vital health funds to be used for killing more unborn babies.

These pro-abortion politicians must resign immediately. They don’t care about the 1345 babies killed so why would they care about people on hospital waiting lists. 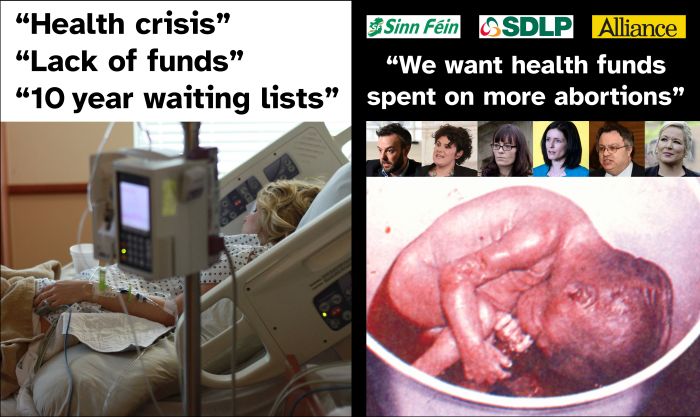